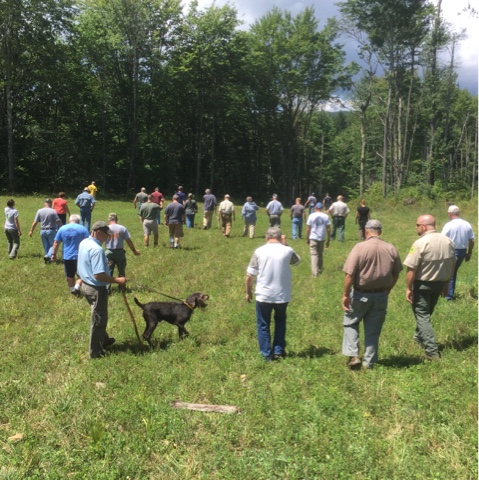 Add Sunlight and Stir: A Day-Tour of Habitat Projects in Kumbrabow State Forest

Since I haven’t been doing much travel to large shooting matches this year, one of the things I have decided to do instead, is use some of that travel money to make an investment in wildlife conservation. One of those investments was to become a member of the Ruffed Grouse Society.
This organization works on the local and national level to improve habitat for game birds, specifically the Ruffed Grouse. They also have a sister society called the American Woodcock Society, accessible through the same link.
Wildlife conservation was a cause near and dear to my own father’s heart, as he was a lifelong hunter, and also an RGS member. Since I’ve gone on a few small hunts of other birds myself now (link and link), I thought it might be appropriate to continue the tradition, and join RGS.
I thought it would be good for me to learn more about Grouse habitat. I have not yet  hunted these birds myself, though I have eaten the fruits of my father’s hunts many times in childhood. I DO know what grouse “drumming” sounds like though, as I had the occasion to hear it with my uncle at the family deer camp a few years ago. At first I thought the sound I was hearing was someone trying to kickstart a motorcycle in the distance. But my uncle informed me that the odd rumbling/buzzing sound was really a territorial display by a male Grouse. I had a hard time picturing this, until I looked up a video. Rather amazing, really.
A few weeks ago I got an email from the RGS, announcing a “tour” of local habitat projects for those who were interested. Since the date fell on a Saturday, I was free, and intrigued, as was my older daughter who happens to be in the university forestry program.
Thus, a couple Saturdays ago, my daughter and I drove several counties away to meet up with what turned out to be a large group of very interested and interesting people. I should mention as an aside, that I am neither a forester, nor a wildlife biologist, so any errors of interpretation or explanation are entirely my own.
The tour was hosted by several individuals from various different, but related, disciplines. It turns out that this group was illustrative of the type of cooperative efforts that are needed in order to make projects of this type come to fruition. Our main hosts were:
Dr. Linda Ordiway – RGS Regional Biologist
Travis Miller – WV Dept of Forestry, State Lands Manager
Rob Tallman – WV Dept of Natural Resources, Wildlife Manager
Shane Jones – United States Forest Service
Anna Branduzzi – United States Forest Service
There were others, representing various organizations, but I apologize that I did not get their names. In total, we were a group of about thirty people. I had not expected a group that large to show up on a beautiful Saturday morning, but there we all were – including a few eager birds dogs! Since the group was so large, we car-pooled-up for our tour, so as to limit the number of vehicles in the caravan. My daughter and I were fortunate to end up in Travis Miller’s truck, so we were able to benefit from his knowledge and commentary for the entire trip. My daughter took notes for the entire tour, as did I.
Our destination (or rather, series of destinations, since this was a tour) was Kumbrabow State Forest, in Randolph County, WV. This is a 9400-plus acre forest range, which is the state’s highest state forest, at 3,000 to 3,930 feet of elevation. 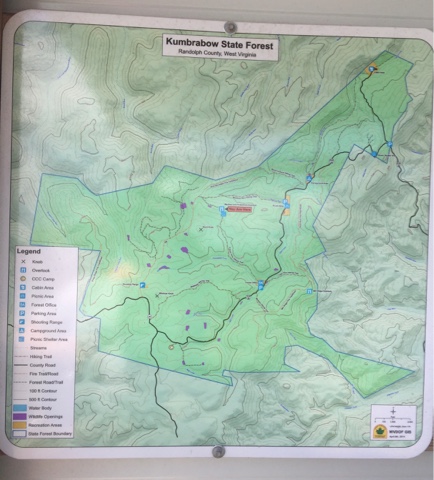 This location has apparently been serving as a laboratory of sorts for wildlife habitat efforts for the past several years, thanks to the team efforts of Travis Miller and Rob Tallman, of the DoF and DNR, respectively.
The partnership between the RGS, the DNR, the DoF, and the USFS has resulted in projects in the Kumbrabow State Forest to attempt to mimic pockets of natural disturbance, in an effort to produce more desirable habitat for the species that we are trying to encourage –  Ruffed Grouse, American Woodcock, and the Golden Winged Warbler, to name a few – in addition to doing no harm to existing species, such as local bat populations. This can apparently be an interesting juggling act, but the projects have thus far been successful in finding this balance.
There are many different types of trees that they are trying to encourage as well, including Black Cherry, Red Oak, and Red Spruce – depending on what the particular area has to offer. In what was to prove one of the highlights of my tour, Travis pointed out to us a surviving American Chestnut tree! This species has all but died out due to a fungal blight which took hold in the early part of the 20th century. This particular tree was remarkable for its height and age in the face of disease. But sadly, the nuts it has produced apparently die of blight not too long after sprouting. 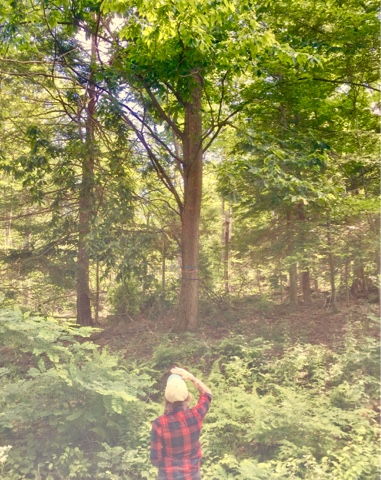 (The flagged American Chestnut tree)
At a couple of the stops we made, there was signage describing the types of habitat projects. I hadn’t realized before this tour that projects like this might require public relations explanations. Apparently the general public sometimes gets upset about trees that are taken down, or areas that look “messy” in a forest land. What people don’t realize is that a manicured park-like setting – which for many is their only experience of the outdoors – is not necessarily ideal wildlife habitat. 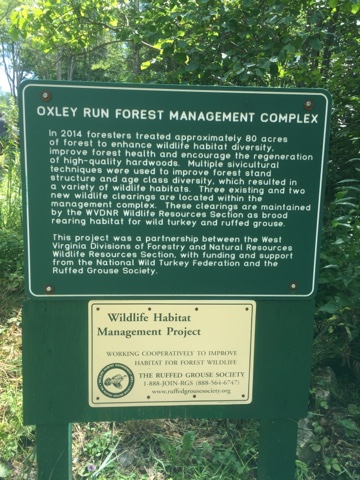 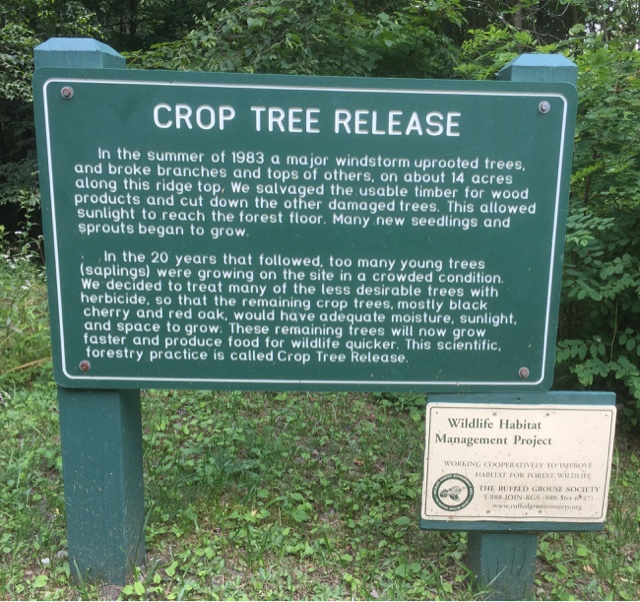 Some of what I learned on this tour, is that tall, dense stands of trees with a dark, shaded forest floor and very little underbrush, don’t support the kinds of wildlife and game birds that many people think they do. What is needed to produce good cover from predators, good nesting sites, and good food sources is what is called Early Successional Forest. This is the type of vegetation and environmental grow-back that results after an area has been disturbed – by storms, or fire, or logging activity, etc – thus giving rise to the term Disturbance Ecology.
One of the key features of this kind of disturbance is that the area is opened up to sunlight, allowing forest floor plants and saplings to sprout up, which had previously been too shaded to survive. This underbrush-type growth provides cover for nesting and juvenile birds, and “mast” seeds and fruits for food. These species often come back all on their own, without any further intervention, after opening the area up to space and light. Thus, the comment was made that all that was needed for this habitat to occur was to “Add sunlight and stir”.
As we drove from stopping spot to stopping spot, projects were visible even from the road. In fact, the forest access road was itself a project. This was something I had not even thought about before, but as part of an improvement project, the team opened up, and “daylighted” a road which had previously been tunnel-like through the dense forested area. Opening up the sides of the road, using a “feathered edge” concept, rather than hard lines of delineation between open and dense areas, allowed the graveled road itself to become part of the habitat. Thus, it provides open areas for some wildlife to feed, with an uneven vegetation edge close-by for cover from predators. The road also then serves as a connecting route and travel zone for wildlife between other “pods” of intentionally disturbed and daylighted forest projects in the area.
One of the main features of these particular projects was the use of a “mulcher” machine, to open up designated patches of forested land to sunlight, and stirring up the soil. This leads to renewing ground vegetation, and starting the Early Successional Forest process mentioned above. While this work “can” be done by chainsaw, and dozer etc, it can apparently be done much more efficiently by one operator on a mulcher.
After a scenic lunch on Potato Hole Trail Overlook, we were given a demonstration of the machine. The mulcher struck me as a sort of cross between a Bobcat tractor, a rototiller, a continuous miner, and a stump grinder. It was donated by the Ruffed Grouse Society early in 2016, and has seen (I believe) a thousand hours of runtime so far.
This link provides a “before” photo of the mulcher machine when it was newly donated by the Ruffed Grouse Society.
Here are a couple “after” photos. 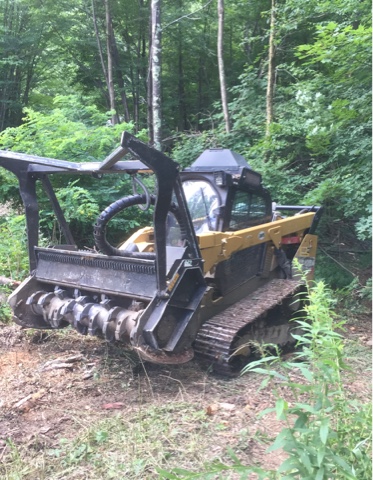 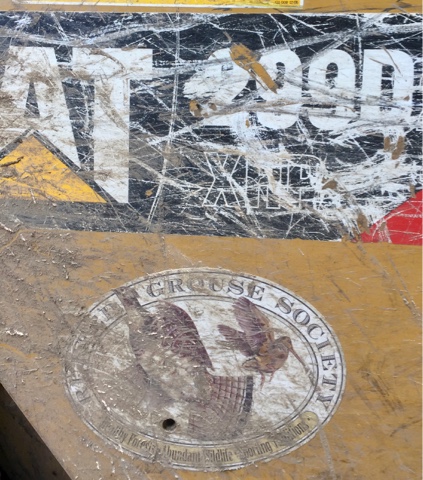 This machine has proven to be a great investment for RGS in the Kumbrabow area, as the machine has opened up several hundred acres of dense forest to pockets of “sunshine” for habitat creation in that time frame.
Organizers admit that at least part of the success of these particular projects is due to the personalities and rapport of the individuals involved. Recognizing this, they are trying to work out ways to translate their efforts into a more formal program or framework that others might be able to use elsewhere. 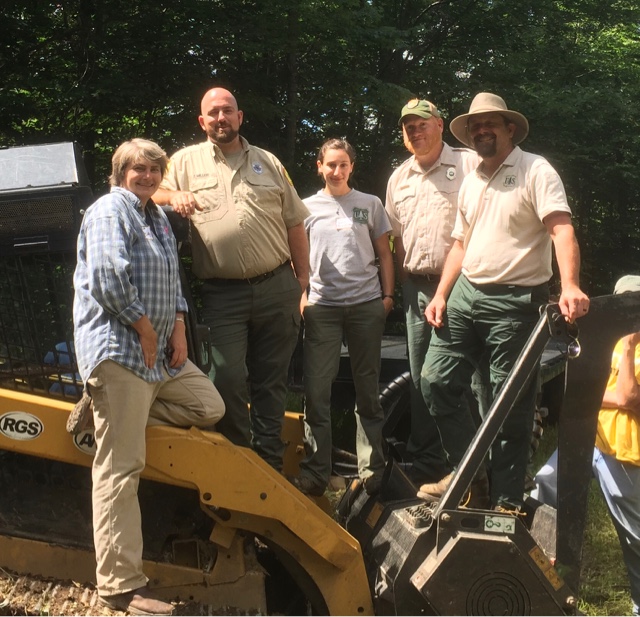 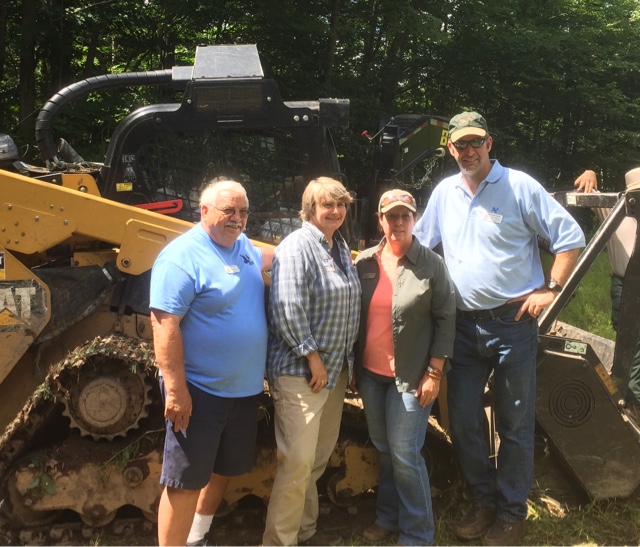 (Representatives from the Ruffed Grouse Society)
They also admit that they do what they do out of passion, and are not very inclined to toot their own horns. At the same time, they recognize that horns MUST be tooted in order to gain support for additional projects.
Many people in the general public don’t realize that it is money from sportsmen and hunters which provides a large chunk of the funding for wildlife conservation. Organizations such as the Ruffed Grouse Society, the National Wild Turkey Federation, Trout Unlimited, and many other organizations – in addition to funds from hunting and fishing license fees – support habitat creation projects like this across the country. These organizations work with state lands projects, national lands projects, and even private landowners to improve habitat for a variety of different species. But they often do their good work outside of the limelight of the mainstream press. Thus, the general public has little knowledge of the good things that are happening for wildlife on their public lands.
I for one appreciated the education, and I was VERY impressed by the efforts of all of the organizations involved. I hope they consider this small blog piece my trumpet blast for them, and their continued success! 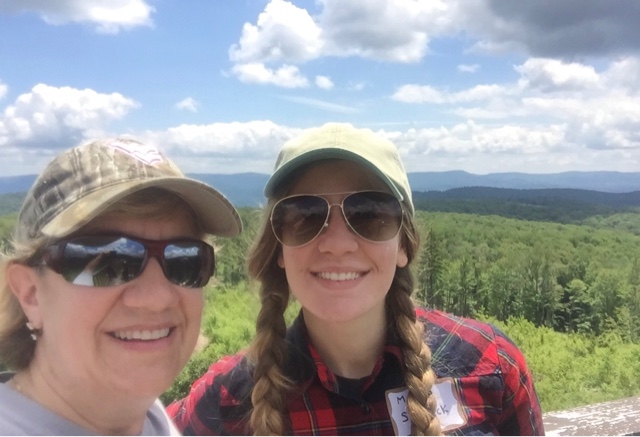 (The author and daughter enjoying the Potato Hole Trail Overlook)