Good Thoughts for the New Year

I’ve decided that I’m going to implement an idea I saw on the Internet. 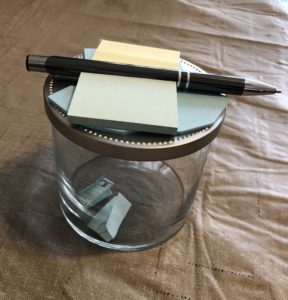 The idea was to write down one good thing that happened to you during the week, and put it in a jar. At the end of the year, you are supposed to have a whole jar of good things with which to reminisce about the past year.

I’m going to tweak that, and make it one good thing a DAY. Primarily because in mid-life sometimes my week is a blur until I get to Friday, and I won’t be able to remember anything well enough to write it down – Ha! But also because sometimes by evening I am so frustrated or down about the day, that it would be good to force myself to find ONE good thing that happened, in order to focus on the positives instead of the negative.

If you are like me, the older you get, the more people drive you crazy, and the more the world frustrates you. So, in order to keep myself from becoming one of those cranky old “get off my lawn you kids!” kind of person, I’m going to try this 🙂

I’m going to use colorful little post-it notes, too, so that hopefully on a bad day, all I will have to do is LOOK at the jar of colorful papers to remind me to focus on the good stuff.

Those good things I write down aren’t going to be world-altering either, because life isn’t full of those. It IS full of pleasing LITTLE moments though – being proud of a new thing I cooked, admiring a morning moon, baby giggles at the office, having a good target run during practice, the satisfaction of planting seeds, the smell of spent powder in the morning …

This is my New Year’s Resolution. You are welcome to come along with me if you’d like. It’s going to be a GOOD YEAR!