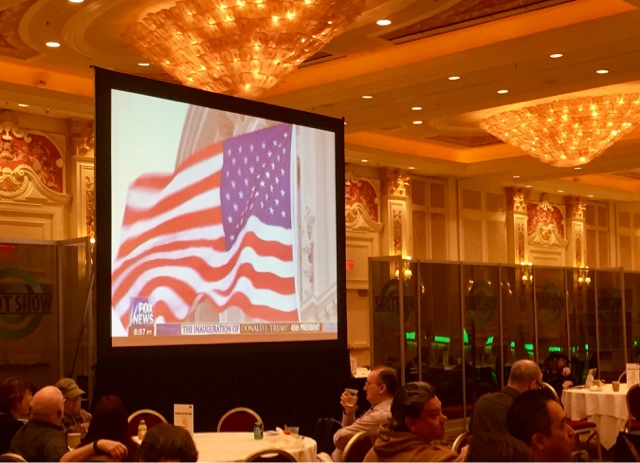 Lessons on the 2A at SHOT

I have to share an interesting experience I had while at SHOT Show last week.

It was on Friday, so the Inauguration festivities were streaming on a big screen in the press room. There were round tables set up throughout the room all week, so you usually got the benefit of sharing a table with some other people, and I’ve been able to meet some interesting members of the outdoor media that way.

While watching the newsfeed, a friend and I were having a discussion about the new president and our feelings and expectations for what might happen next. After my friend left, another fellow at the table asked if he might ask me some questions. Turns out he was from Australia (SHOT brings people from all over the globe), and he was curious about some of what my friend and I had spoken about.

Since I mentioned how hostile Hillary had been to the 2A, one the things he was curious about was what my feelings were on the 2nd Amendment and what the Founders had intended. He asked whether I really thought that it was meant to be a defense against a tyrannical government. And I think my response surprised him. I explained the that 2A was “absolutely” a check on out-of-control government, and that in essence, the 2A is the “Escape Clause” of the Constitution.

Nobody likes to think much about that now, but the Founders had just been through a bloody revolution in order to secure their citizen freedoms from a too powerful government. Although nobody WANTED to go through it again, they were determined that they would if they had to. Retaining the means for defending themselves from a government run amok – revolution- in the hands of The People, was EXACTLY what the Founders meant with the 2A. This form of government was a grand experiment at the time, and some people even wanted to make George Washington “king” – because they had no experience outside of a monarchy. The Founders were deathly afraid of powerful central government, and wanted The People to retain the power to say “NOPE”, if things got out of hand.

Obviously, nobody today wants to have to invoke the “Escape Clause” or pull the “Kill Switch” as it were – because it would mean complete disaster. But that option exists for a reason, and that reason is one of the bedrock foundations of the country – the right of free men and women to decide how they are governed.

I also explained that this is exactly why the supposed arguments about “muskets” vs  modern rifles is completely invalid. The Founders wanted The People to have the same “arms” ( i.e. Hand carried weapons) as any standing army (which the Founders also opposed).

I also explained that people in Australia probably don’t understand this, because they had a peaceful separation from the mother country, and still honor the queen. We had years of bloody war instead. So, our perspectives are completely different. I told him that I am actually a direct descendant of people who have been in the country since the French and Indian War, and I also have several ancestors who fought in the Revolution. Those people understood very well the need for personal arms, the reality of bloody conflict, and the importance of keeping a reign on government.

The fellow also asked if it is possible to “change” the Constitution. I replied “yes”, but that it is a big deal and an arduous process – this was also an intentional design by the Founders. But I went on to point out that this didn’t stop people like Hillary from trying to use the “reasonable restrictions” idea to slowly drip, drip drip our rights away.

I’m glad I’ve read some history, and it was a privilege to share it with someone who has no experience of that in his own country. I also explained that I have some friends who have emigrated from behind the (former) Iron curtain, who are some of the staunchest defenders of the 2A I have ever met – because they’ve come from where there WERE no such freedoms.

The fellow then explained to me, that in Australia there is no constitutional guarantee for the freedom of the people to bear arms, and all it took was a single mass shooting for most of their firearm freedoms to disappear. He said that in Australia you can’t even keep a baseball bat by your door for the purposes of self-defense without fear of prosecution for harming a criminal who breaks into your home. It sounds as if criminals have more rights than homeowners do there, which is obviously complete craziness from “our” point of view.

This exchange was a rare and interesting privilege for me  – to be able to see the whole thing through someone else’s eyes, who hasn’t had the benefit of the Founders’ foresight. I am glad for the experience, and it makes me even more “Proud to be an American”.