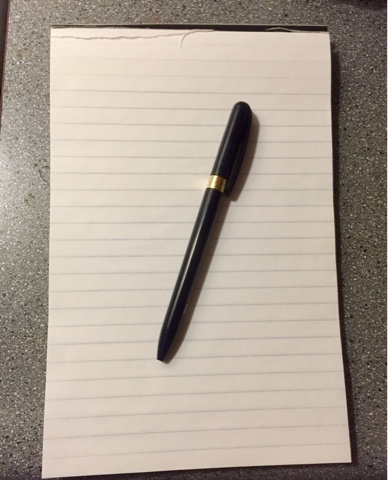 The Legacy of the Hand-Written Word

She’s in assisted living, and has good days and bad days. And when I call on the phone, if it’s a bad day, I may only get a minute and a half of conversation before the call is over. Yesterday, I called and there was commotion in the hallway so she mostly couldn’t hear me. She was frustrated and so was I.

So I sat down and wrote her a letter instead. I figured she could read it at her leisure, and even read it over and over if she wanted, and it would give her something tangible to remember that I HAD thought of her. A phone call can be forgotten within a few minutes, when one has a bit of creeping dementia. But a letter on the side table remains lying there as a reminder.

It’s that tangible quality of an actual paper letter that makes it special, and I think we have lost something important in that, with the advance of the electronic age.  Mom sort of barely learned to use email about a year before dad died. After he died, she gave it up quickly, because the computer pretty much baffled and frustrated her.

Thus, for the last ten years, we have relied on the telephone. It was at times frustrating that I couldn’t just email a photograph or a quick line, saying that I was thinking about her. I was jealous of friends whose mothers not only used Facebook, but who also knew how to text. But Mom is who she is, and I wasn’t going to be able to change that. So we muddled through.

After a while, she stopped initiating calls herself. So the onus was on me and my brothers to do the calling. Now, because she can’t always reach the phone, or figure out what button to push to talk, it requires two phone calls – the first to the nursing desk, so that someone can go make sure that she has the phone and can push the button. It gets more and more frustrating.

It’s also important to me that I hand write the letter. I have legible handwriting, and I try to write pretty big for her. I think a typed and printed letter is too impersonal – it may as well be from an insurance company as from a loved one.

This was brought home to me this week as I was going through some things of mom’s as we moved her belongings out of her apartment. I found some things in my father’s handwriting, and though he’s been gone for ten years, his handwriting reminded me of the letters I would get from him when I was in college. His handwriting was NOT so legible, but the deciphering was half the fun. The handwriting brought a little of him back to me.

I worry that the next generation will have virtually nothing to remember “us” by, as emails become buried in anonymous servers, email accounts change,  and their very intangible nature renders them virtually nonexistent. In contrast, I still have a handful of letters written to me by my great-grandmother when I was a child. Granted they can’t be “forwarded” and “CC’d” into the millions of copies as emails can, but they have their own concrete existence. They don’t require electricity or battery power, and a machine to read. They only require eyes and literacy.

Those letters aren’t lost to me as hundreds of my father’s photographs are. He played around with amateur photography in his short retirement, and he saved most of them to floppies and Zip drives. I “think” I have hard copies of most of the important ones, but the technology has marched on, and it would be a hassle and expense to get anything retrieved now. He also wrote a few essays, and if he had not had the foresight to print out and file paper copies of those essays, they would be lost as well.

Because of this, I’ve decided that I should print out a copy of each blog post to file for posterity. Not that any of it is great literature, but because it will be something tangible for me to show for my efforts. Maybe the current internet technology will be transferable to the next age, and accessible to my great-grandchildren. But I have my doubts. So I’m going to put at least one copy on paper, and file it away.

One last point about the letter-writing. I encountered something with hand-writing a letter, that I had forgotten about with the ease of editing electronic type. I made mistakes and misspellings, which I had to cross out or write over. I think there’s a bit of humanity in that. With paper and pen, we can’t erase our mistakes as if they never existed. We either have to live with the blots and imperfection, or start over. And starting over isn’t always feasible. That’s a bit of a metaphor about life, I think.