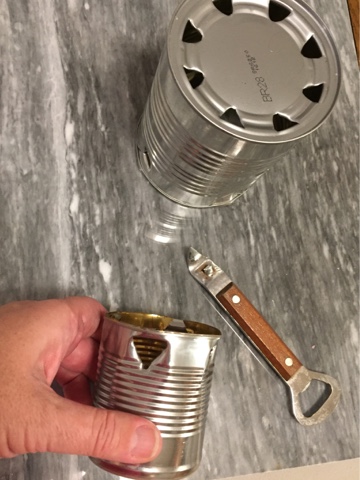 Some of you who follow me on Facebook know how I hate to throw stuff out that might be useful. I’m not “quite” a hoarder – at least not yet – but I AM happy if I can find a secondary use for something I would otherwise throw in the garbage.

So the other week when I make some homemade spaghetti sauce and had some tomato cans leftover, I started to brainstorm, and scour the internet for ideas. I came across several different iterations of a tin can “survival” stove, and thought I would try it out. I’m not even going to give you links for this, because the examples are too numerous to list – everything from scout projects to real live backpacker sites.

I gathered ideas from all these sites, and then tried to design my “own”, using just the tools I had. I had a regular can opener, and a juice can punch opener, but no tin snips or other tools with which to work with sharp metal, so I tried to keep it really simple. And I am tickled to report that it worked!

My design started with a 28-oz size tomato can, and an 8-oz size tomato sauce can. I left the bottoms on these and washed them well. The small can was going to hold my fuel/fire. I used the juice punch to put 4 holes along the open edge of that can. That would give me some air circulation and also provide a place to insert the punch and use it for a handle/lifter when the can was hot. I punched holes in the closed end of the large can to create a “burner” surface when it was upended, and four similar holes along the open end to provide more air circulation.

I decided that I wasn’t going to mess with commercial fuel, and if possible wanted to have the stove function without much in the way of other burnables, in case it was wet and there was no other fuel. I decided to to try something I already had.

A year or two ago, I had some leftover candle bits and decided to make fire starters with them. I used a cardboard egg carton, and stuffed the holes with wads of dryer lint from a load of all cotton flannel sheets. (Probably any dryer lint would work, but some stuff doesn’t burn as well, and also has hair in it, which stinks when it burns). I then melted the candle pieces a little bit at a time in the microwave, and poured the wax over the lint wads until it saturated the lint and the paper egg carton sections. When it was cooled/dried, I cut the sections apart and stored them in a ziplock bag. I got a dozen fire starters out of it, and it cost me nothing. 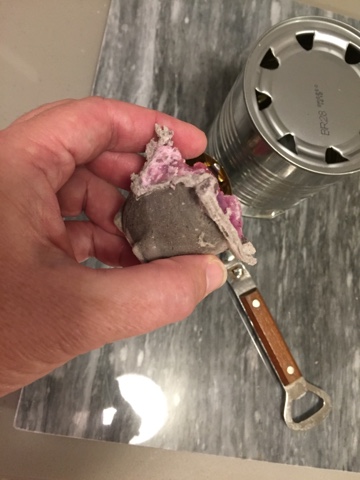 It turns out that one of those fire starters fit perfectly in the 8-oz fuel can. There was also some room left for bits of dried grass or short twigs if I had any, so I decided to see if just that would work as a sort of a do-it-yourself “sterno” for my stove. 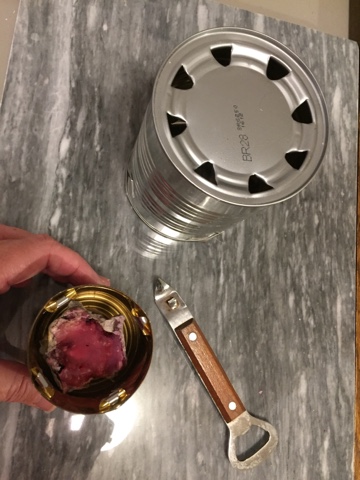 I had one more can to use, and that was from the sweetened condensed milk I used for the pumpkin pie. I wanted to use that one for a “pot” to heat water in. I put one juice punch hole in that can – to pick it up with the opener – but it would also work to put two holes in, and insert wire to use as a bail/handle.

It was a sunny afternoon in the gravel backyard, so I decided to try out my invention. I used one wax starter and some dry grass. It was pretty windy, so it took about 3 matches before it caught, but then it burned like gangbusters. When I put the “stove” can over top, it helped protect the fire a bit more from the wind, too. 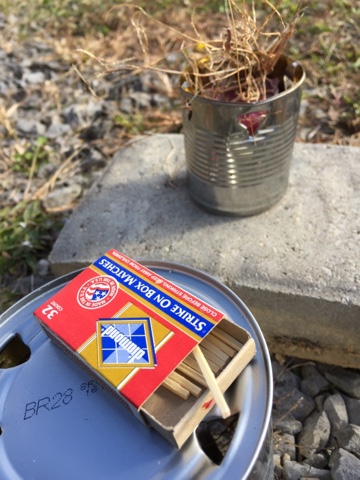 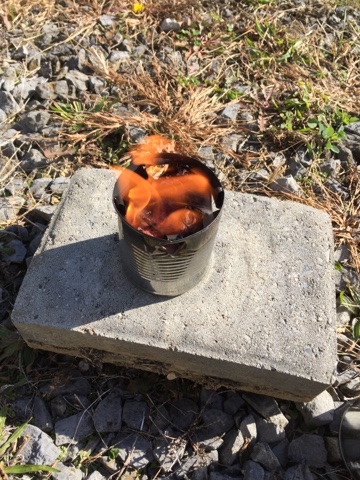 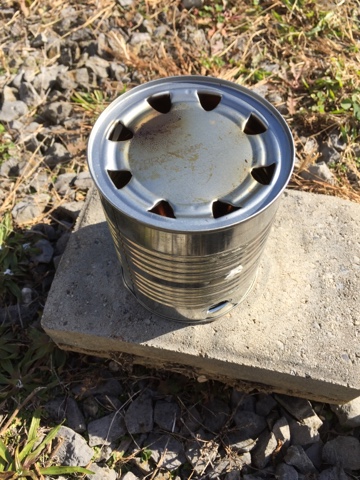 I filled up the other small can with water, put it on the “stove” and waited. It took ten or fifteen minutes, but I got a good simmer enough to make a cup of tea. I didn’t bother to wait for a boil, as I was using potable water, and you can’t drink boiling water anyway, so it’s a waste of fuel to get it that hot. 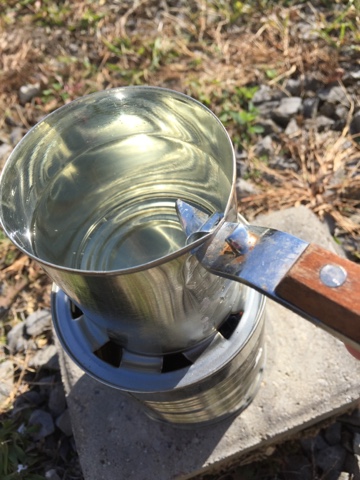 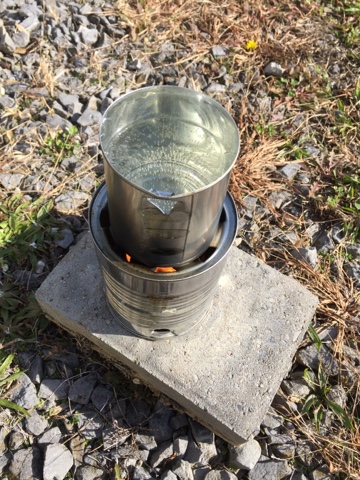 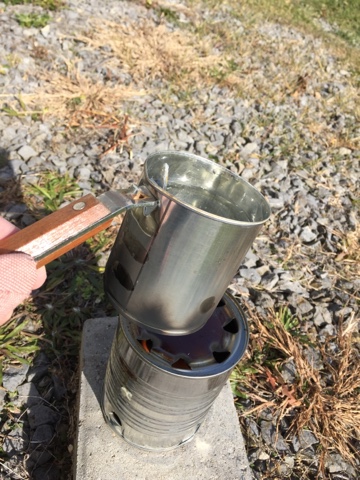 Then, to push things further, I lifted the stove up with the can punch, added another fuel lump, replaced the stove and tried something a little bigger. This time I used an actual stainless steel backpacker cup/pot to try to cook ramen. It could have just as easily been a larger can – I just didn’t have one. 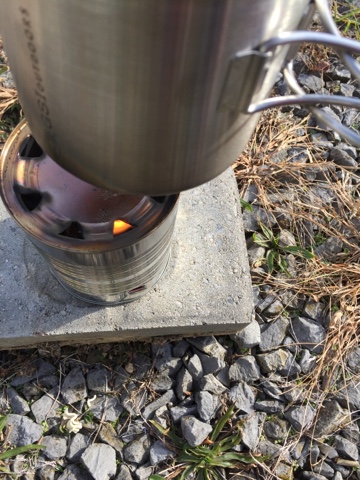 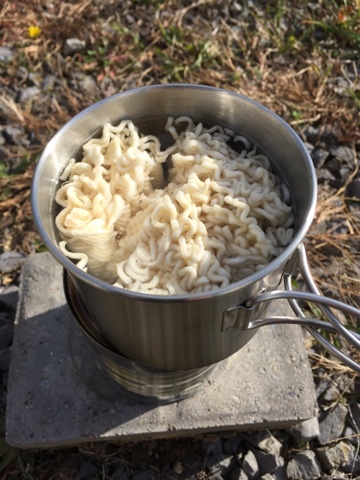 This took longer, as there was a bigger volume of water to heat. I put the noodles in as soon as the water started to steam, to give them a longer cook time, since I figured it might not actually boil. It didn’t. The water simmered enough to cook the noodles though, before the fuel started to smolder and go out. I’m not sure if it was just played out, or if I need more ventilation holes for the bigger pot. That’s something  I’m going to have to play with. 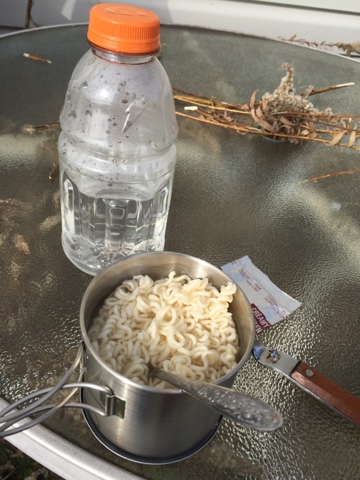 But – this was a really fun experiment, and it actually worked. The wax fuel was kind of stinky, but it worked very well – especially given the windy conditions. I wonder if adding some commercial firestarter sticks would work as well? That’s something else I’m going to have to play with.

The bottom line is that it IS possible to make a functional emergency stove for zero actual money, and without any metal-working skills. The cans nest inside eachother, so this rig is compact enough that it would fit in a hunting backpack, and the fuel isn’t as flammable or heavy as dragging a jug of Coleman fuel along. Granted, you couldn’t use it to cook an entire real meal, but you could have some hot drinks and a little hot food to help stave off hypothermia while the search party was looking for you. For a no-cash-money investment, that seems like a good deal 🙂