My SHOT Show Day 1 day started at 3:30 AM. As I’ve said before, my body never really leaves the Eastern Time Zone, so I keep odd hours in Vegas. With that morning time to kill, I managed to get two blog posts up while eating my hotel room oatmeal and instant coffee, and then hopped the 7 AM shuttle bus for the Show. 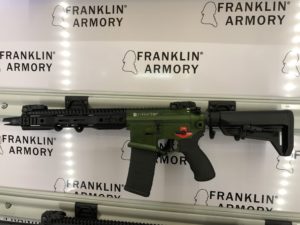 The first event I hit was the Franklin Armory Reformation Reveal. They made several points in their presentation. The Reformation has “straight cut lands and grooves”, which are NOT rifling, therefore it is not a rifle. It has a standard chamber, and can fire off the shelf ammunition to 4 MOA, though they are working on proprietary ammunition to maximize accuracy to 1 MOA. They have an opinion letter from the ATF, dated August 3, 2017, stating that this is a “firearm”, but not a rifle or shotgun. Therefore, Reformation says that this cannot be a Short-barreled Rifle or Short-barreled Shotgun, and thus does not require NFA paperwork, or a tax stamp, and is not an AOW. It is expected to be available in the second quarter 2018. The binary trigger will be an option, but will not be standard, according to the engineer I spoke to. It will be rolled out in .300 BLK to start, and then 5.56 will follow.

After Franklin Armory, my day was a blur of places I stopped to look, or stopped to say hi – most of these were drive-bys -The Second Amendment Foundation (sponsors of DRGO), Frog Lube, KelTec, GemTech, Action Targets, Geissele, Otis, Syren, Savage, and I’m sure there were more that are slipping my mind at the moment.

XS sights has a new F8 night sight, which has a larger dot for faster target acquisition. I really liked the one they had on display. Even my older eyes could find it quickly. I’m looking into one of these for my Glock43.

I had great conversations at Primos and Bushnell about cellular game cameras. I got a name and number and am going to be pursuing this further. Bushnell in particular has a model which has an accelerometer, which will send a message to your phone if it is moved. You can then apparently choose to track it via GPS, take pictures remotely hoping to visualize the thief, and/or send a signal to lock the whole thing down so that it is useless to anyone else. This feature was especially attractive to me, as family property is a couple hours away, and my brother has had a game cam stolen from his own property.

Aimpoint had an interesting press conference where most of the discussion was about their new simulator system. I need to stop by the booth for a demo. More on that later. 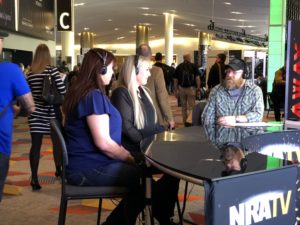 I also stood and watched while Julianna Crowder and Robyn Sandoval of a Girl & A Gun Club had an on-air conversation with Cam.

The highlight of my day though, was attending a press conference by the National Wild Turkey Federation to talk about hunter recruitment. I’ve said previously that one of my goals for the year is to learn to call and hunt turkey, and I just joined the NWTF a few days ago. There was a very interesting presentation about the pending aging hunter population cliff, and the need to recruit from new demographics – including college students, locavores and the conservation-minded. 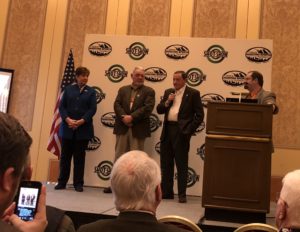 After a question and answer session, They pulled business cards out of hat for a few door prizes. Guess who won a collection of various turkey calls?!! I am SO excited!! How better to kick-start my goal for the year!! They will mail them to me so I don’t have to fly home with a large package, but apparently there will be a collection of various types of calls to try. I am beyond tickled with this turn of events, so stay tuned through the year for posts (and maybe Instagram videos) of me making terrible noises while learning this new “musical” skill!