I had an interesting new shooting experience last Friday evening. A new indoor range in the area started holding weekly, indoor 2-Gun shoots, and I was able to try it out.

Now, I have done very little indoor shooting. I ran through the shoot house at Gunsite for a class several years ago, and IDPA Bug Nationals 2014 was at an indoor range, but other than than, I have been strictly an outdoors, all-weather, range shooter. I have NEVER shot a long gun indoors.

I admittedly did not “prepare” for this much at all. Other than a few shotgun rounds during a pheasant hunt in November, and sighting in my deer rifle, I haven’t shot anything at all for almost 3 months. My guns weren’t even clean. I decided to at least run a bore snake through them before I packed them in the carry bag, but that is as far as it went. I packed my pretty Adams Arms piston gun that I won in a raffle the other year, and my M&P 9 (also pretty – see the side bar photo). I dug out my 3-Gun holster and mag pouches that I haven’t used in a year and half, threw some 9mm and 5.56 rounds in my bag, and called it good. 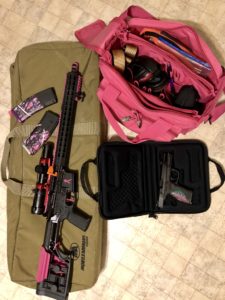 When I arrived at the facility at 5:30 Friday night, there were a bunch of guys already waiting, including a few that I knew from my club, so thankfully I had somebody to ask where to sign up and where to put my gear. I do muddle through on my own, but sometimes it’s nice to see a familiar face, and not have to be so guarded. Sometimes being a female showing up alone to a match can be a little awkward initially. If the men there don’t know me, they often don’t know how to “take” me or “treat” me. I mean seriously – a frumpy, middle-aged lady shows up to your match with a hot-pink range bag and an olive drab gun case, asking questions because she’s never been there before? You know the reaction is going to be awkward – LOL. There are times that I can practically hear the mental gears grinding around me as they ask themselves who this lady is and what do they “do” with her? Fortunately, it usually doesn’t (and didn’t) take long for them to figure out that I was “okay”, and knew what I was doing.

After the sign-up period, and a few late arrivals, they started the shooter’s meeting and handed out the stage plan(s) for our perusal. We were going to be taking up one whole side of the indoor range, and would be running two “stages”, which were really two strings of the same set-up – the second run in mirror image of the first. Simple, right? 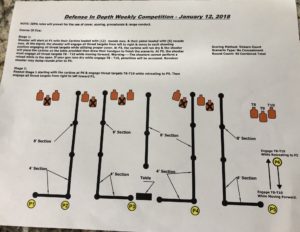 Well, not really, because this match was going to be run with IDPA rules, rather than 3-Gun rules. That meant that we had to use the barricades as cover – “slicing the pie”, and shooting the targets in tactical sequence. It also meant that targets would be scored using standard IDPA scoring – meaning that accuracy counts. In 3-Gun you mostly just need one hit in the A zone, or two hits anywhere on the target to be “clean”.

On top of that bit of thinking, after the pistol transition, there was also a mandatory tactical reload behind cover, which you had to remember to do, or run dry in the open and be penalized. That “running dry in the open” part involved advancing/charging three targets with two shots each, which you also had to remember to do, after having just had to use cover for the previous part of the scenario.

The second string/stage then involved starting on that same side, this time engaging those targets while retreating, and this time, doing it with the rifle. You had to remember to back up enough to not whack the barricade with your muzzle as you cleared the corner and moved back down the stage. The cover and targets appeared differently coming from the opposite side, so more thinking was involved. The bottom line was that this arrangement left a lot of room for procedural brain farts to happen. And they did. Fortunately mostly not to me.

I had a fun time on my run, but because I was trying to avoid the aforementioned brain farts, I probably went slower than I was capable of. Even so – safety first. Be safe and have fun are always my first two goals, and in this instance they were my only goals. Sometimes I add the goal of “don’t be last”, and I managed that one too!

When the scores were tallied, I came out smack in the middle – 8th out of 16. That made me quite happy, considering that I hadn’t shot for three months, was using dirty guns, and my overall lack of preparation. Several of the guys ahead of me are Master level shooters in IDPA or USPSA, so there was zero danger that I was going to win the match – LOL. But, there were guys who didn’t know me, whom I outshot (with my pink-blinged rifle and flowered pistol, no less), so that always gives me a little pride boost. Fortunately, I was wasn’t the only woman shooting this match either. There were actually two other females, but they shot in the other group, so I didn’t get much chance to get to know them. 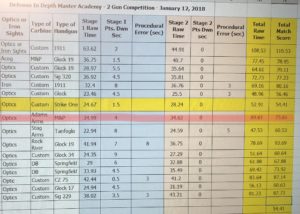 There was admittedly a good bit of standing around (like 3 hours worth) for 2 minutes of personal shooting in this match. There were 16 shooters, broken up into two squads, which shot consecutively. The max number of shooters was said to be 24, so they will probably need to tweak things as they go along, in order to accommodate those numbers in a reasonable amount of time, without shutting the entire range down to other business while the match is going on. But this was a fun start, and I hope they keep on going with this. It broke up the gun-less winter blahs for me on an ugly-weather Friday night, and for that, I thank my squad guys and Defense in Depth very much!