SHOT Show on a budget

Those last two words are how someone like me qualifies to attend. NSSF has pronounced this little blog “media”, and I haven’t argued with them. This will be my fifth year in attendance. 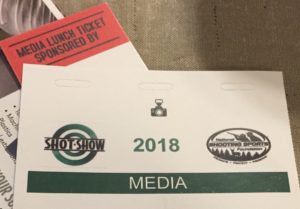 Since this blog, and all my associated scribblings elsewhere, – at A Girl & A Gun, and Doctors For Responsible Gun Ownership – are done out of “passion” and not “profession”, I don’t get paid to attend SHOT. I attend on my own dime, because “passion” doesn’t pay the bills 🙂

So, over the past few years I’ve learned how not to waste so much money, and do SHOT on a budget. I thought there might be people who are doing this for the first time and might like some suggestions. Lots of people have lots of different ways of doing things, but this is what works for me.

I book my airfare with credit card miles. The choices can be a bit limited, but it costs me nothing out of pocket that way. I also book my layovers in southern airports like Houston, Dallas, or Phoenix, so I don’t get hung up in a Chicago snowstorm in January. You people who already live in warm places can just keep quiet 🙂

I don’t rent a car. I do the shuttle from the airport, and rarely splurge on a cab or Uber. The SHOT shuttles are free to and from hotels and the convention center.

The first year or two I stayed at the fancier hotels, but I’ve discovered that unless you are an Industry Big Shot and need to have meetings in your rooms, this is a waste of hundreds of dollars a night.

I spend the vast majority of my day on the Show floor, or in the press room, so I use the SHOT web page list of rooms available at “show rates”, and stay someplace for $40 a night or so. Yes, some of the older resort hotels like Circus Circus and Excalibur do have rates that cheap. I don’t care if the decor is from the 80’s. As long as the room is clean, the bed is comfy, there is a desk for me to blog upon, and the Show shuttle runs there, that’s all I need.

Some people may choose to have a roommate to share costs as well, but being an introvert and a 3 AM blogger rather negates that option for me. After a day of “people-ing”, I need to be alone to recharge, and since my body stays on Eastern Time, I am awake at odd hours. Thus, it is worth the cost to have a room to myself.

Fancier hotels may have remote-controlled window blinds and big screen TV’s, but they also have mini-fridges so full of overpriced bar items that there isn’t even room for a slice of leftover pizza. I don’t think ANY Vegas hotel I’ve been in has a coffeemaker or a microwave, either – which brings me to the next big ticket item.

Vegas food (at least in the strip area) is expensive. I try to only actually buy one meal a day, and that is often lunch. Thus, I bring a lot of breakfast and snack food from home. If you rent a car, you can always find a grocery store, and there are some well stocked Walgreen’s on the strip with some grocery type items, but you will pay through the nose. I don’t do a car in Vegas, so again, I bring my own food. I tend to eat like a Hobbit at SHOT, because my body never knows what time it is.

My body stays on Eastern Time the whole week, so I am usually falling asleep by 8 pm and awake by 3 or 4 am, with a rumbly tumbly. To avoid having to actually put on a bra and pants at that hour, just to go find coffee and food down in the casino area, I have taken to bringing a few breakfast items from home.

I bring instant oatmeal or ziplock bags of oats and brown sugar. I also bring instant coffee, or make “coffee bags” out of grounds for one cup, placed in a filter and secured with a bread tie. There being no microwave, I also bring an immersible water heater. It doesn’t take up much space and provides much hotter water than you can usually get from the tap. 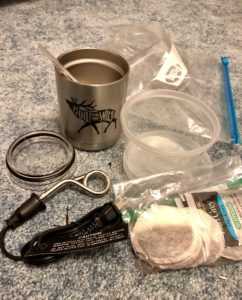 It also allows me to pack a few cups of instant mac-n-cheese or ramen for the odd hour blogging munchies. The immersible works very nicely with the little YETI cup I got last year as swag. Thanks YETI

“Official” Breakfast (which by then, is really Second Breakfast for me), is usually taken care of, as there is at least one “press breakfast” I get to go to, and on top of that, there is usually continental stuff every morning in the press room. (there are a “few” perks to the media badge, even though I am a nobody). Mmmmm – chocolate shavings. So that takes care of Elevenses.

I also bring snacks from home to munch on throughout the day – nuts, granola bars, dried fruit, pretzels, dark chocolate, etc , which I divvy out into snack size ziplock bags before leaving home. There are food vendors in the convention center, but the food isn’t cheap. Bottled water also isn’t cheap, but there are water stations in some areas, and if you bring your own empty bottle, filled with hotel ice, you can save some money there too. It’s important to realize that Vegas is a desert environment and you need to drink throughout the day to avoid a headache (at least I do). Those snacks take care of Hobbit Tea Time.

An advantage to being off-time-zone is that I am usually ready for Luncheon or Supper before everyone else is. That means that I can sometimes get in before the crowds. And there are crowds EVERYWHERE. By the way, that is another plus for bringing your own first cup of coffee in the morning – the coffee places in hotels are completely JAMMED in the morning. You will be competing with 60-70 thousand of your closest friends – who also are grumpy before their coffee.

Although having one good steak for the week is a nice splurge, there are cheaper “restaurant” options if you look. There is a Denny’s on the strip, as well as a couple McD’s for breakfast sandwiches in a hurry – but these will also be crowded. There is a food court over in the Venetian “Mall” area. It is a bit of a byzantine walk from the convention center (I’ve often thought of leaving a trail of breadcrumbs), but if you want Chinese food or pizza for lunch, it can be worth the extra effort. It too is crowded during peak hours, however. 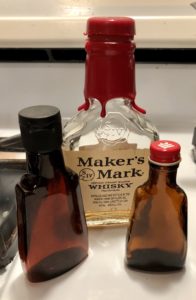 Obviously Vegas is fueled by alcohol, and you can find it virtually anywhere. But it won’t necessarily be cheap – especially on the Strip. I am not much of a party girl, and one drink usually does it for me, so spending big bucks for a cocktail or beer really chaps me. Thus, I bring my own bourbon too. If I don’t have any free sample bottles, I fill old vanilla bottles and put them in ziplock bags. I know that sounds rather redneck, but I’m cheap, and if all I want is a bourbon on ice or a shot in my tea in my room while I type, I refuse to pay cocktail prices for that. One other thing to look for is that often on the first couple days of SHOT, some booths will have free beer and give-aways in the late afternoon. Free beer always tastes better.

I hope this has given some “first-timers” a bit of a heads-up for budget SHOT-ing. I know that some people LIKE to splurge in Vegas, and some people have a company expense account. But I’m helping two kids through college, so I do this on the cheap. 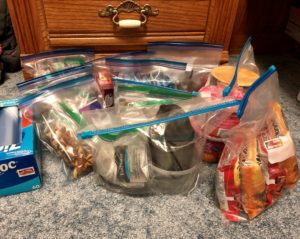 I know it sounds like dragging all this extra stuff from home is a lot of trouble. But if you figure that a casino restaurant dinner for one, plus tip, can cost 30 to 40 bucks and up, you can save yourself a chunk of change. For me, the space that the food takes up in the suitcase also guarantees me open space on the trip home that I can use for swag. You can’t hate swag – that’s free too, after all!

Have fun – and maybe I’ll see you on the SHOT Show floor!