The remaining three weeks until the Big Match flew by in a haze of back-to-school physicals, band practice, and other “real world” activities that did not involve shooting. My job tends to have a big peak in August when everyone realizes that they need a kindergarten physical, sports physical, or school immunizations. The days are long and don’t leave much time for anything else but work, sleep, and school obligations. So it was, that I didn’t manage any further practice until it was time to load up the car. It’s a good thing that I’m not a sponsored or professional shooter. I’ve already got a demanding career, and I’m happy to be able to manage the practice time that I can, but sometimes that’s not very much.

My packing list was an 8.5 x 11 inch page long – in two columns. I was going to be gone for 6 days, and needed gear for all three guns plus ammo. Plus it needed to be secured for travel across state lines. I’m sure this is old hat for the pros, but it was new for me, so I worried about every detail. I was going to be driving alone, so I was able to put the back seat down to make more room for gear. Unlike some docs, at least I drive a sensible car. A Subaru station wagon is more suited to my personality, and it holds a lot more gear than a BMW convertible. (And I was glad for the AWD after soaking thunderstorms and parking in fields for the event).

Since this was my first really BIG match – let alone my first 3Gun event, I obsessed about everything… was it going to be cold and rainy?… Or hot and sweltering?… How many spare pairs of shoes should I take?…Was it going to be muddy or dry?… Do people change and wear decent clothes for dinner, or do they just go eat in sweaty range gear? Turns out that the answer to all of those questions was “Yes”. It was a multi-day event, and I was going early, so I needed A LOT of clothes and gear.

Finally, after months of preparation, I was on the road. Such a pleasant drive. So nice to be alone and away from the usual routine. It said something about my stress level at work that month, that I was blissfully happy to be “on vacation”  – cozily ensconced in a Super8 motel in Kentucky. Not the dream destination of most docs, or most women I know – Ha! – But it was heaven for me.

I arrived a full day and a half early, because I wanted to have plenty of time to get the lay of the land, learn where I needed to go, (since I was alone) and I also wanted to leave myself time to visit Mammoth Cave National Park while I was there. I had never been to that part of the country, and I wanted to take advantage of the opportunity.

The other main reason that I wanted to arrive early is that I wanted to watch how the Pros do 3Gun. A month or two earlier, I had gotten a mass email from Babes With Bullets, saying that several of the women Pros were going to be available to “coach” us newbies through our first 3Gun match. In order to be able to do that, they had made special arrangements to shoot their portion of the Pro Match (it was a Pro/Am) a day early. That meant that they would then be free during the rest of the match to help the “Babes” participants, and it also meant that if I arrived early enough, I would be permitted to tag along and watch them do their thing. Really??!! Yes please – sign me up!

What a generous gesture for those Pro women to make! They rearranged their schedules, and agreed to shoot all out of their usual routine, just so they could then volunteer their time to help amateur women shooters. I’d make a very large wager that this doesn’t happen often (if at all) in any other national level sports competitions.

On the evening I arrived, I had gathered up as many tourist and Nat’l Park pamphlets as I could, so I could get my stay all planned out. The Mammoth Cave Visitor’s Center opened at 8:30, and the first tours started at 8:45. Since the Pros weren’t going to start shooting until 11 or so, I had plenty of time that first morning to poke around the Visitor’s Center and get at least one of several types of available tours in, without missing anything happening up at Rockcastle, which was only a 10-15 minute drive from the Park Visitor’s Center. 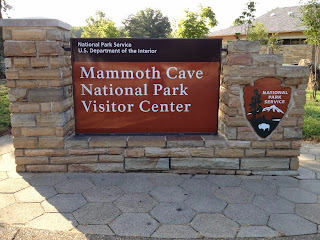 On my first cave tour, in addition to the geology and history of the cave, I learned about a fungal disease called White Nose Syndrome that was threatening American bat populations. I was intrigued, and stood there cornering the poor park ranger with questions for probably 20 minutes after the tour was over.  (Unfortunately for her, I spent 15 years in hospital microbiology labs before starting medical school, and am an insufferable geek when it comes to germs and infectious disease. Just for future reference, if anyone in the room is going to get excited about a Giardia outbreak, it would be me. Yeah, sorry.) But, fortunately for my poor guide, I had a time schedule to keep, so I finally let her go and moved on. What a cool morning – geology, history, AND microbiology all in one tour! After taking my leave of the poor ranger, I tossed my jacket back in the car, and headed on over to Rockcastle. (It turned out that the only times that jacket got used through the entire event was during my two cave tours. The rest of the week was simply ….. HOT.)

I got there just in time to catch the Pro ladies getting ready to leave for their first stage of the Pro match. Since this event was a Pro/Am, there were different stages set up for the pros, which were more difficult than the ones set up for the amateurs. (Personally, I thought the amateur stages weren’t exactly easy-peasy either, but more about that later). It’s a good thing I caught the group before they left, or I’d have never found them. I followed the car/truck caravan down the hill, out one road, and down another, waaaay out into the back of beyond. This was a seriously HUGE property!

The caravan finally stopped along a dirt road with fields on either side, bounded by hills, with a couple tables and a port-a-john as the only immediately visible signs that something was supposed to be happening there. Eventually I noticed the Stage sign and saw the set-up. Apparently this is where they set up the really long distance rifle stages, so it HAS to be out in the back of beyond. But, since this was my first time, I was clueless, and just tagging along to watch. Turns out that I was the only “spectator” per se that first morning. It’s good that I knew I had been invited, or I’d have felt really weird. To reinforce that “weird” feeling was the fact that there were several photographers and a film crew with Michael Bane there as well. This is how much of a “newb” I am — I stood there for probably 5-10 minutes looking at him and his crew, thinking “Boy, that guy looks familiar … where have I seen him before?” Ha! Just give me a “Gibbs”-style smack upside the head next time! D’oh!

I tried at first to be just a fly-on-the-wall. I didn’t want to bother anybody or be in the way, since I was only watching. I don’t think I even introduced myself. Deb Ferns, Kay and Lena Miculek, and Lisa Munson knew me from previous Babes Camps, but there was also Dianna Liedorff, Athena Lee, Randi Rogers, and several other ladies who I had never met. Sooo, I was mostly just the one hovering around looking out of place. But I was all ears and eyes – I was there to learn.

After awhile, I loosened up a little, smiled and asked a few questions. But I tried not to bother anybody. They were “working”, and I was not. Even so, I picked up a few things about rifle placement, etc, and this is where I learned that there is an “end” time to these stages. That was new to me. In the pistol matches I had shot, you can take however much time is required for you to finish the stage. In this event, however, you “time out” at 100 seconds. Which means, that you don’t have all day to make those long distance shots. I learned that because of this, if you are having trouble with a particular target, it can be a wise strategic decision to take the penalty for a miss and move on, rather that timing out and leaving other targets still unengaged. It was a strategy that I ended up using during my own match. Thus, that knowledge alone was worth the trip.

After two long distance stages out in the boonies, they broke for lunch and then proceeded to more familiar territory for the afternoon session – the bays just up the road from the lodge. By this time I had had a chance at lunch to chat with the ladies and introduce myself to the ones I hadn’t met. This made the afternoon a little more relaxed for me. I was also joined at that point by Robin – another Babes alum – so I wasn’t the only spectator anymore! That made it even more fun, as we watched the events and caught up on life since we had met at 3Gun camp the previous year.

Have I mentioned that it was hot? Yeah – like 95 degrees and 80% humidity kind of hot – the kind of hot that means thunderstorms. And so it was, that by the start of the last stage of the day, the black clouds had gathered, and the drops began to fall… and fall… and FALL. Athena took refuge in the back of an SUV, Dianna and several others hung out in the gear shed, and Deb brought out her pink umbrella/parasol. But still, the show went on. By the time everyone was finished shooting, they were all soaked to the skin, and the bay looked like a flood zone. I had dragged out a stained old golf umbrella from the back of my car, so Robin and I were fairly dry from the thighs up. But from the knees down was a different story. It rained HARD, and at one point it was kind of blowing sideways. That day I learned an important lesson: You might be wearing Gore-tex waterproof shoes, but you reach a point where that just doesn’t matter, when it is raining so hard that the water runs down your legs and soaks into your socks! 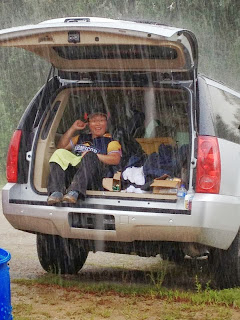 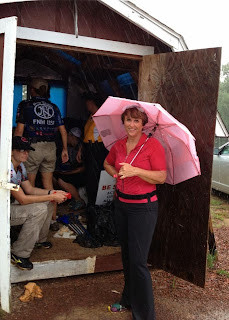 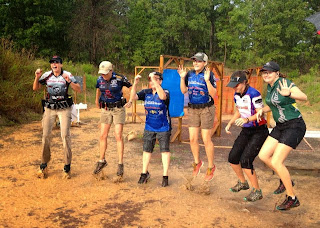 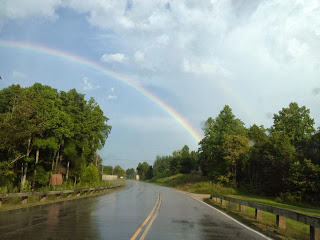 I ended my first day at Rockcastle by stopping at a convenience store on the way back to my hotel, so that I could buy a newspaper to stuff my shoes with to dry them out overnight. At least I felt vindicated for packing three pairs of footwear!