Thursday was… exhausting. You are probably getting tired of hearing me say that. But I swear I’m not just whining… okay not much anyway LOL. Seriously, here are photos of the map of the show. The map is as big as an old school roadmap and uses BOTH sides. There is a 16 oz water bottle for scale. There are literally 12 MILES of aisles to walk. 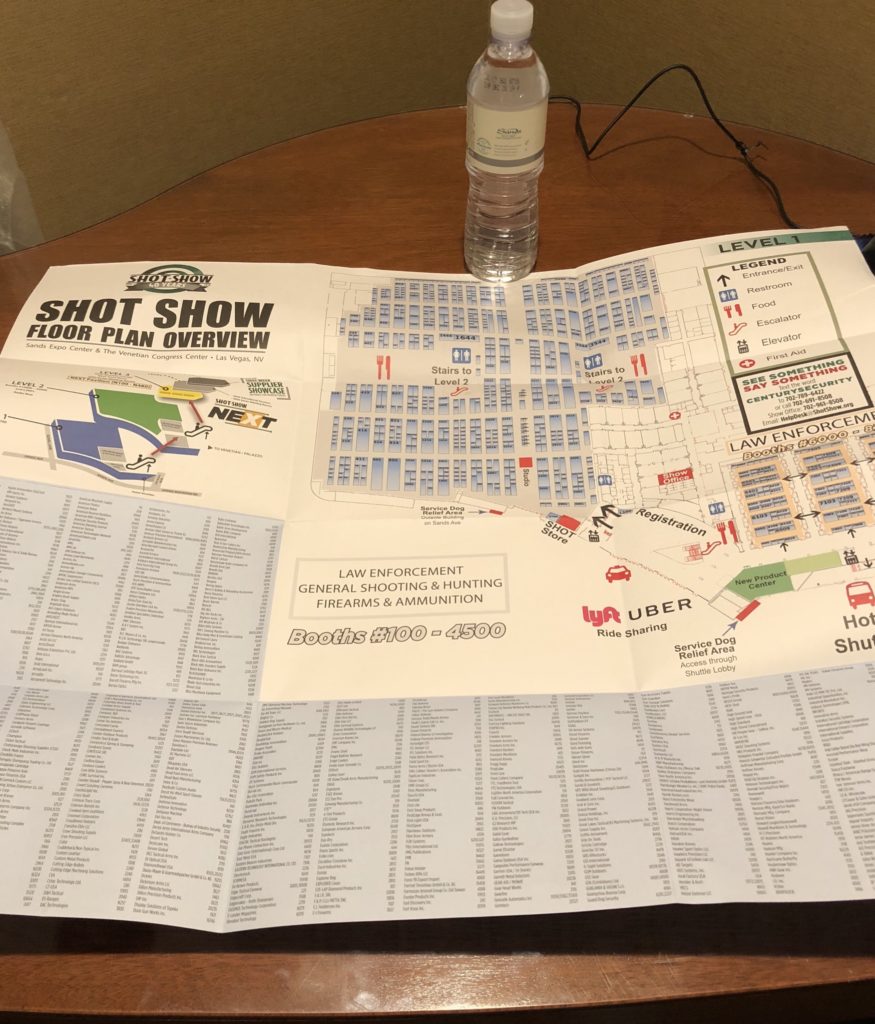 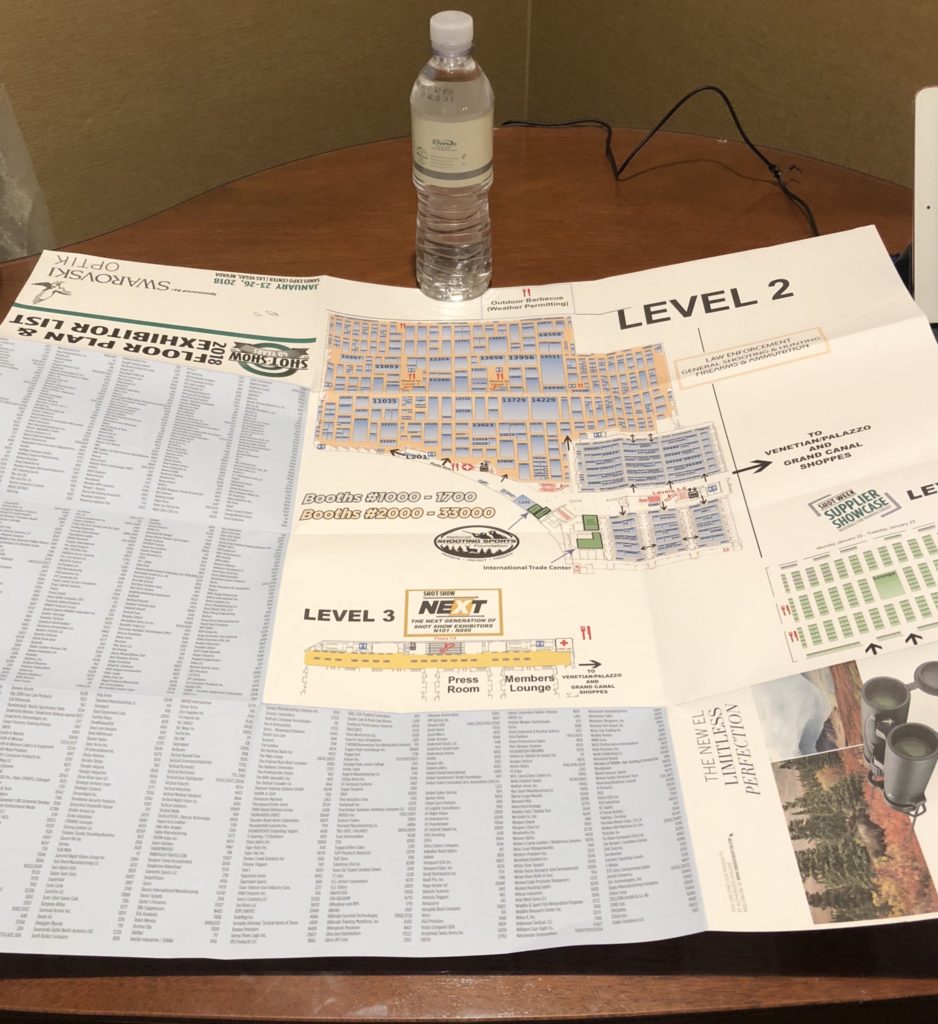 But the day was also exciting and interesting. It’s currently 5 AM Friday morning as I type this. My brain is starting to run out of logically linked thoughts, so this may soon devolve into bullet points. Apologies in advance, but I figured you’d rather hear about what I did, than worry about sentence structure.

7 AM shuttle again, and quick coffee and danish in press room.

9AM meeting with 5.11 to review some new products.

10AM lovely chat over coffee/tea with Tatyana of SHOOTessa and Sheli Walters.

Collected some stickers and patches for friends on my way to Aimpoint, where I had a quick chat and photo with Tatiana Whitlock. 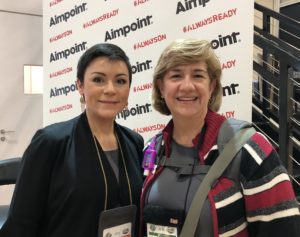 While at Aimpoint, I checked out their new Virtual Reality trainer that they are calling GAIM. I’d never done VR before, and it was very odd at first, because as the rep strapped the headset on me, the real platform rail in front of me that I could feel with my hand, suddenly became a VR rail – but I could no longer see my hand on it. It was the same disconcerting feeling when the rep handed me the GAIM “rifle”. I could see the VR rifle in front of me, but could not see my own hands reach out for it. The other weird thing is that spectators could watch what you were seeing on a screen back out in the “real world” 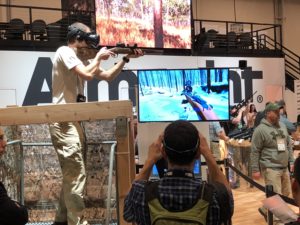 There were four choices of scenario, and the rep suggested I choose the hog hunt, which I did. After he calibrated the set up for what I was seeing (you were supposed to shoot with both eyes open), he set me loose.

This was a snowy scene, which extended a full 180 degrees as I looked around me. There were a total of 20 hogs and I had 40 rounds.The hogs came from random directions singly and in groups. If I shot and missed, or they became aware of me, they started running, and then I had to lead them to shoot. After a few seconds I started getting the hang of things, and had a ton of fun. It was really weird to be able scan around me, rather than having a flat static video screen to watch. I ended up bagging 16 of the 20 hogs (the four I lost, was because I had trouble with leading too much or too little). The rep was impressed and asked if I was a hunter. I don’t know if he was “really” impressed, or just impressed because I was female, or because he was just being a salesman – LOL. But it was a ton of fun regardless. This system isn’t really for home gamers though. It runs in the $8000 range, he said, and hunting clubs in Europe use this type of thing to get ready for a live hunt. If I have time, I want to go back today and do it again! 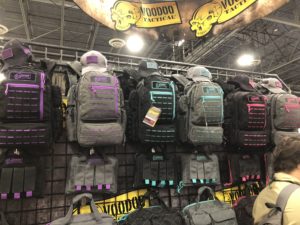 I also swung by the VooDoo Tactical booth to see their new version of the Mini Tobago pack that I reviewed last summer. In fact I was wearing mine at the time. They have changed the Molle configuration and added teal as a new color option, but the basic design is unchanged.

Stopped by Glock to fondle some goods, including the Gen 5 Glock 19

Stopped by Springfield Armory to watch a talk with Rob Leatham.

Stopped at MagPul to see the new 10 round Glock magazines.

Stopped at Dickies to see their tactical wear upgrades. 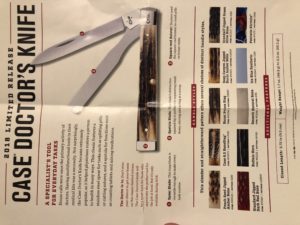 Stopped at Case knives to see their retro “Doctor’s knife” which is a limited edition re-release of an item from their vault. It has a spear blade and a spatula blade, and a “square-end bolster”. This was supposedly a staple in old school doctor bags in the early 1900’s, when we still made house calls, did our own pill crushing, and mixed up medicines on the fly. Interesting from a historical perspective, and I may have to have one just because 🙂

I did stop back in the press room for a bit for a snack and a coke, and the other guys at my table were from Gunblast.com. It always amazes me and makes me feel like a pretender that I get to be in a press room full of people who are recognizable from TV or YouTube or print outlets. But then you realize that these folks are just people too, and doing the same job you are – just on a larger scale. It boggles my mind sometimes though.

Speaking of meeting other people, my day was capped by the Ladies of the Industry Meet and Mingle from 4 to 6 pm last evening in the Bonnier Sportsmen Lounge. I’m not sure what the actual attendance numbers were, but it looked liked a couple hundred women were gathered from all “walks” of the Industry spectrum – from lowly bloggers like me, to competitive shooters, business owners, marketing managers, podcasters – you name it, and there were women there representing it. This was the third year for this event (I think?), and I enjoy it more every year. I’m not a huge “mingler” (we’ve talked about my inner introvert), but I do manage to meet at least a couple new people every year.

This was a MUCH better option than the Tim Kennedy Beer Can Crushing event which was also going on during this time slot – LOL. Not that I don’t drool over Tim Kennedy, but we women are still so much of a minority at SHOT that I have NEVER had to wait in line at the ladies restroom. With over 60,000 attendees. Not in five years. Ever. That’s saying something – LOL. So any opportunity we gals can get to be together and network with eachother is a GREAT thing!