One thing I was NOT prepared for when I took up shooting 5 years ago, is the amount of “stuff” I was going to accumulate. All I started with was a pistol – just a smallish pistol. And the first box of ammo – “50 whole rounds in a box? That’ll take me a long time to use” …. Oh silly, naive little me.

But the pistol came in a case, and with a cable lock… that also had a key that I could lose. There were also two magazines. And there was an owner’s manual, and a cleaning rod, and a brush, and a little envelope that held 2 rounds of fired brass that maybe in some states I’m supposed to give to the State Police or something. There were a lot of pieces and parts that came with this smallish pistol.

What people failed to warn me about is how these parts breed.

Before I knew it I had more boxes of ammo, and the saved plastic insert thingies, because someone who reloads might be able to use those. And there was saved brass. And there was one kind of holster, and then another kind of holster, and then a little safe to keep the pistol in, and a belt, and a couple hundred foamy earplugs and an ugly green set of earmuffs, and snapcaps. And then soon there were rifles with more cable locks with keys to lose, and more owners manuals, and more cleaning rods, and something called Boresnakes, ( Why did it have to be snakes?), and more magazines, and more kinds of ammo, and more saved brass, and little springs, and little screws, and little hex wrenches to tighten the little screws, and scope rings that fit, and scope rings that don’t, and they have their own screws and hex wrenches, and then there are the old front sights in a little baggie, and another pistol with more paperwork and more brass in a little envelope, and ANOTHER cable lock with a key I could lose, and now there were extra backstraps to keep track of, and a Bigger safe, which had its own paperwork/owner’s manual and a combination to code in and remember, but at least there weren’t any more keys for me to lose, and then there was another set of sights in a little baggie, and more earmuffs, and even MORE magazines, and something called an uplula, and yet another belt and 3 more kinds of holsters, and shell caddies, and more springs, and a recoil pad, and extra chokes, and more kinds of ammo, and along the way there were stickers and targets and bottles of this oil and that oil and bags of little cotton patches, and old oily socks, and reference books and learning videos, and PVC pipe target stands and bags for them, and I could just go on and on… It’s crazy.

What I’m thinking is, if I have this much “stuff” after only 5 years, what must the abodes of lifelong shooters look like? I mean, I had to finally move my gear to a corner of the basement the other year, just to get it out of my bedroom so I’d still have a place to sleep!

The other thing that occurred to me, is with all these springs and screws and extra/old sights and cable locks and such, is the stuff worth keeping? If it’s not, then what do I DO with it? Does one simply throw these things away? That seems a shame, especially when someone else might be able to use them. It’s not like you can send them to the Salvation Army Store. Is there such a thing as a shooter’s garage sale? The closest thing I can think of is a gun show, but I don’t have enough stuff to be worth getting a table.

Maybe it could be a gun club fundraiser? Has anyone ever tried that? How about if everyone in the club gathers up their random parts and pieces, and brings them to the clubhouse. Then they sort out the pieces, set up tables, signs and displays, and charge say five bucks at the door. I’d bet with the really big clubs that there’d be enough parts for someone talented to build several whole new firearms just from random pieces. But, maybe it’s not that simple, what do I know – I’m just the idea gal.

And while I’m talking about “stuff”, the newest addition to my “stuff” has arrived. 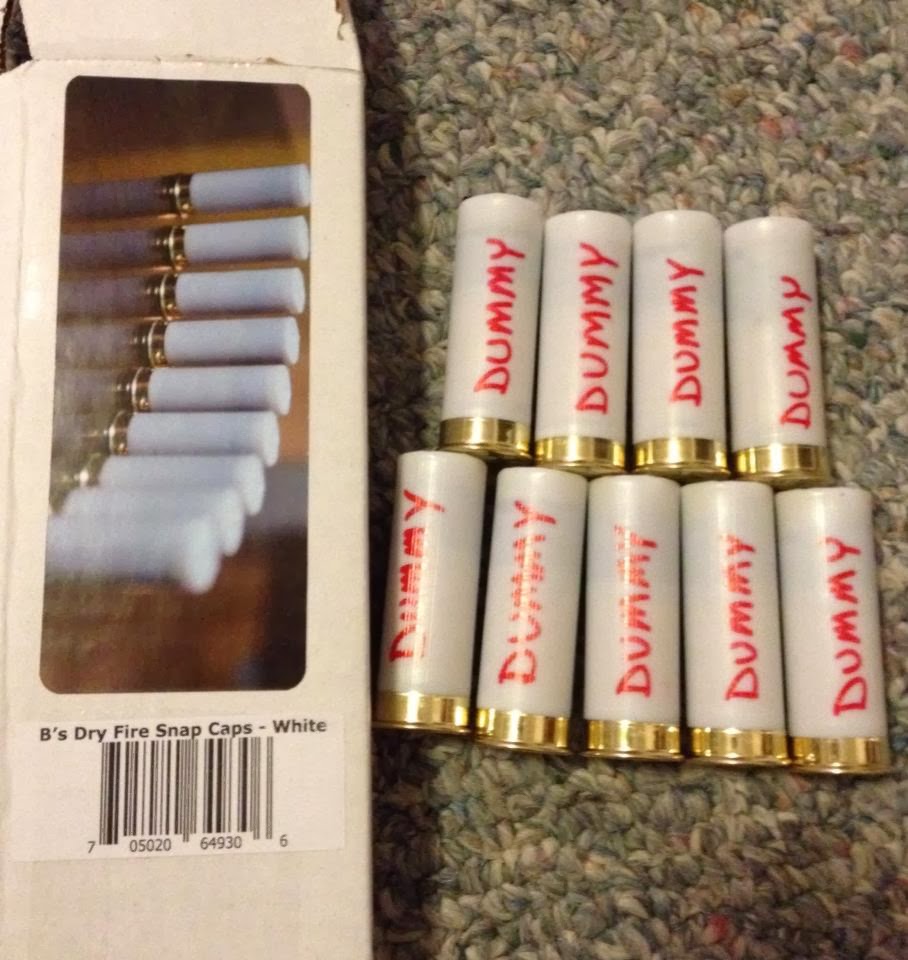 Yes, they are already white, and thus obviously not a usual color for live rounds, so this should cue me that they are practice dummies, But… control freak.
So I took a sharpie to them. That part was easy. The hard part is making myself actually practice now that I have them – HA!

I was wondering if I could kill two birds with one stone, and combine a new walking routine with a reloading routine. If I took the shotgun along with me on my walks and practiced reloading the dummies while I was on the move, that shouldn’t disturb the neighbors and the HOA much …….. should it? 🙂