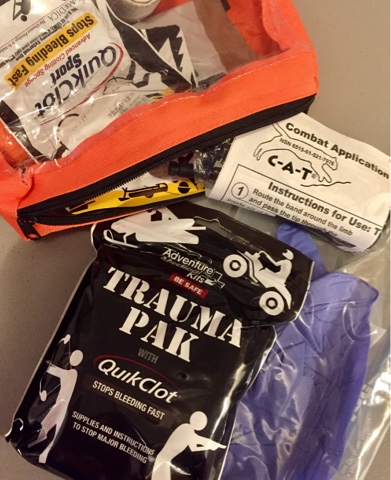 Putting the Hammer Down

Fair Warning, that I will be wearing my Cranky Old Broad Hat today. The easily feather-ruffled should probably go read something else this time.

With readers thus warned, I will begin this post with a declarative statement:

EVERY trigger pull should be a mindful, deliberate action, not just a thoughtless gesture in the general direction of the backstop simply because it’s part of the routine.

This is not my original thought-provoking idea. I first read about this concept from Kathy Jackson of the Cornered Cat. https://www.corneredcat.com/

I tried and failed to find the original article reference, but as I recall, this was the gist. It changed the entire way I think about safe unloading protocols.

This concept was brought back to my mind recently when I saw that someone I follow online had learned the “flip and catch” maneuver when unloading a semiauto pistol. It wasn’t “just” the maneuver that bothered me, but the fact that the routine included a failure to check the chamber before doing the reflexive trigger pull. When I brought my concerns to the fore in my unfortunately typically tactless way, I was casually dismissed with the claim that the magazine was out, the round was out and the trigger was pulled, how much more safety did I want?

Since this person didn’t ask “why” I felt this maneuver was unsafe, I didn’t have the opportunity to explain that because the shooter failed to check the chamber, that he was essentially using a thoughtlessly reflexive trigger pull to “prove” that that gun truly was unloaded. If the chamber was unchecked, even if a round was flipped and caught, how does the shooter KNOW that there wasn’t perhaps a weird double-feed after their last shot, and an additional round still in the gun? Think hard about that for a second. Do any of us REALLY want a random and cavalier trigger pull to be our “proof” and insurance against injury, death, or property damage?

For those of us whose only training has been on the competition range, this trigger pull is a regular habit, which is required as part of the unloading routine, under the direction of a Safety Officer. The Safety Officer directs you to drop the magazine, and then he or she inspects your chamber to be sure it is empty. He or she then directs you to “drop the hammer” or pull the trigger while pointed at the backstop as final verification that the firearm is truly empty. The problem with that is, that the trigger pull has become a mindless reflex, rather than a deliberate, final “test”, done carefully aimed at the backstop, in case all of the previous unloading checks have failed.

Before you dismiss me as a Nervous Nelly or Nagging Mother, allow me to explain why I feel so strongly about this particular issue. A few years ago, I was forced into the role of first responder, when someone’s cavalier trigger pull on an unchecked chamber caused a negligent discharge twelve feet down the line from me. That person  pulled the trigger while dropping the hand downwards toward reholstering and put a 9mm round into their own foot. Thank God it was a distal extremity with no arterial hit. But, I had to scrub someone else’s blood out from underneath my fingernails after the ambulance left, because I had nothing initially but my bare hands and a sock to keep their bleeding under control. (I now carry a small trauma kit, including gloves, in my range bag) There is nothing like scrubbing someone else’s blood off oneself (and the HIV testing afterwards) to provide a good hard reality check. Things like this CAN happen, and they DO happen, because human beings get careless and cavalier with unloading safety protocols. I do NOT want to have to do that EVER again. Are we clear on my motives and strong language now?

To understand why I feel that last trigger pull step should be undertaken with grave seriousness, let us review not only the Four Rules of Firearm Safety, but WHY each one is important. Those Four Rules build up several “layers” of safety, so that if you fail to abide by one, hopefully the other Rules will still prevent a tragedy.

These are the kinds of things that it is helpful to think about from time to time. The Four Rules are not just a formality and boxes we are supposed to tick. There are very serious reasons behind these interlocking and overlapping rules, and we should all abide by not only the letter of the Rules, but the spirit of the Rules. They exist for a reason. Learning cool tricks and being on YouTube do not absolve you of your responsibility to The Rules. They may save someone’s life someday, including your own.

If you still think all of this  is needless finger-wagging, and none of it could possibly happen to YOU, I urge you to watch a few YouTube videos of “accidental” firearm injuries, recall the image of me scrubbing the blood off my bare hands, and think again.

Edit to add: Thanks to Kathy Jackson of the Cornered Cat, who combed through old posts and found this for me. 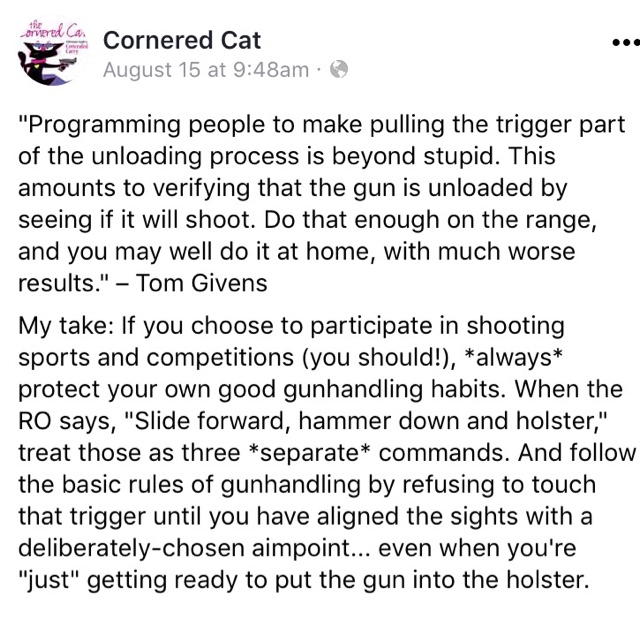